COVID-19 update: We are open for business, however if your product is out of stock please contact us for an expected delivery time

Our Story leading to wheels4dogs

See Heidi Videos. Julia and David first noticed a problem with their German Shepherd Dog (GSD), Heidi, in 2008 when they realised that one of her back feet seemed to be catching as she walked.

During a routine trip to the vets for vaccinations they mentioned this and, after tests were given the diagnosis of Degenerative Myelopathy (DM) or Chronic Degenerative Radiculomyelopathy (CDRM) to give its full name. Their vet told them that there was no treatment and that she would get steadily worse until she lost all use in her back legs.

Once they had absorbed the diagnosis, they decided that they were not going to give in and just wait. Over the next 12 months her condition gradually worsened. Internet research showed that there were wheels available and they were lucky to find a secondhand set for a GSD locally. Sadly they found it very difficult to get her into these, they were very heavy and she just stood trembling.

They discussed this with their Vet, who had been doing her own research and that was when they found Walkin Wheels® in the USA. After an initial period of learning for both Heidi and Julia and David, they caused lots of amusement in the village when Julia was seen running down the road trying to keep up with a GSD determined to get down to the village green and beach a.s.a.p. Walks were never the same again as people used to constantly stop and talk to them and give Heidi lots of fuss. Over time her fitness and strength developed until she could go for 2 and 3 mile walks and even canter along the beach. She got her freedom and independence back and they had two more years until a cancer finally took her from them.

The wheelchairs are light but rugged and stable enough for a dog keen to explore ‘off road’ and revisit all her favourite places.

See Heidi in our Videos of Walkin Wheels®

When Julia and David were given the chance to start their own business importing these amazing products to the UK, they didn’t hesitate.

After over 6 years of running Wheels4dogs the time came for Julia and David to retire. They have now handed over the reins to me, Becky. I purchased Wheels4dogs from them in November 2016. I have always had a special love for all animals and running a business that helps pets enrich and extend their lives is really rewarding. Meeting these pets and their owners is truly inspirational. 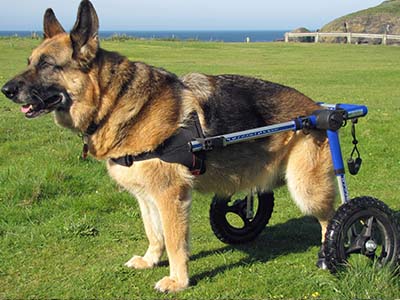 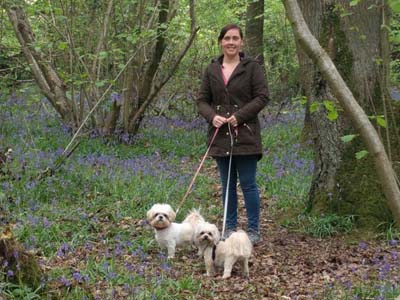